If someone asked you right now how stressed you are, what would you say? A little? A lot? You do not know?

Those are all valid responses, but they are not especially useful to researchers and medical professionals because they are subjective and not easily quantified. Nonetheless, in lieu of a better method of measuring stress, the common method for years has consisted of a stress questionnaire. The main alternative to the questionnaire, a blood test, can provide quantitative data but requires a trained professional to draw the blood, and the stress of the procedure itself—being poked with a large needle—can skew the results of a lot of people.

But something better might be right around the corner.

Wei Gao, assistant professor of medical engineering at Caltech, has produced a wireless sweat sensor that can accurately detect levels of cortisol, a natural compound that is commonly thought of as the body's stress hormone. In a new paper appearing in the journal Matter, Gao and his fellow researchers show how they designed and made the mass-producible device and how it works, and demonstrate that it is effective at detecting cortisol levels in near real time.

The development of an inexpensive and accurate device for measuring cortisol could allow for more widespread and easier monitoring of stress but also of other conditions including anxiety, post-traumatic stress disorder, and depression—all of which are correlated with changes in cortisol levels.

The sensor Gao developed is prepared using a similar approach as another sweat sensor he recently created that can measure the level of uric acid in the bloodstream, which is useful for monitoring conditions like cardiovascular disease, diabetes, or kidney disease. That sweat sensor, and the new one Gao and his team have created, are both made of graphene, a sheet-like form of carbon. A plastic sheet is etched with a laser to generate a 3D graphene structure with tiny pores in which sweat can be analyzed. Those pores create a large amount of surface area in the sensor, which makes it sensitive enough to detect compounds that are only present in very small amounts in sweat. In the new sensor, those tiny pores are coupled with an antibody, a type of immune system molecule, specifically sensitive to cortisol, thus allowing it to detect the compound.

The sensor was tested in two different ways. In one test, a volunteer's sweat was analyzed over a period of six days, and data representing cortisol levels were collected. In a healthy individual, cortisol levels rise and fall on a daily cycle. The levels peak just after an individual wakes up each morning and decline throughout the day, and that is exactly what the sensor detected.

Gao says this is the first demonstration of a sensor that can noninvasively monitor the daily fluctuation of cortisol, adding that monitoring the daily cortisol cycle of a patient could reveal the presence of mental health conditions.

"Depression patients have a different circadian pattern of cortisol than healthy individuals do," he says. "With PTSD patients, it's another different one."

In the other test, changes in cortisol levels were recorded as they occurred in response to an acute stressor. This was done through two experiments. In the first, test subjects were asked to perform aerobic exercises, because intense exercise is known to cause a strong increase in cortisol. In the second experiment, test subjects were asked to submerge their hands in ice water, a stressor sufficient to elicit cortisol release. In both experiments, the sensors detected rising cortisol levels right away.

"Our analysis time could be only a few minutes," Gao says. "Typically, a blood test takes at least one to two hours and requires stress-inducing blood draw. For stress monitoring, time is very important."

Though Gao's sensor may find many uses in typical medical applications here on Earth, it is also being vetted for potential off-world applications. In October, NASA announced that Gao is one of six researchers selected to participate in studies of the health of humans on deep-space missions. Gao will receive funding to develop the sensor technology into a system for monitoring the stress and anxiety of astronauts as part of the program, which is being administered by the Translational Research Institute for Space Health (TRISH).

"We aim to develop a wearable system that can collect multimodal data, including both vital sign and molecular biomarker information, to obtain the accurate classification for deep space stress and anxiety," Gao says.

Funding for the research was provided by the Rothenberg Innovation Initiative, the Carver Mead New Adventures Fund, the Caltech and City of Hope Biomedical Research Initiative, and the National Institutes of Health. 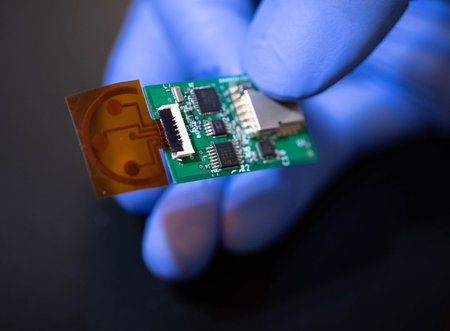 A wireless sweat sensor that can detect a hormone related to stress Credit: Caltech
Image Lightbox 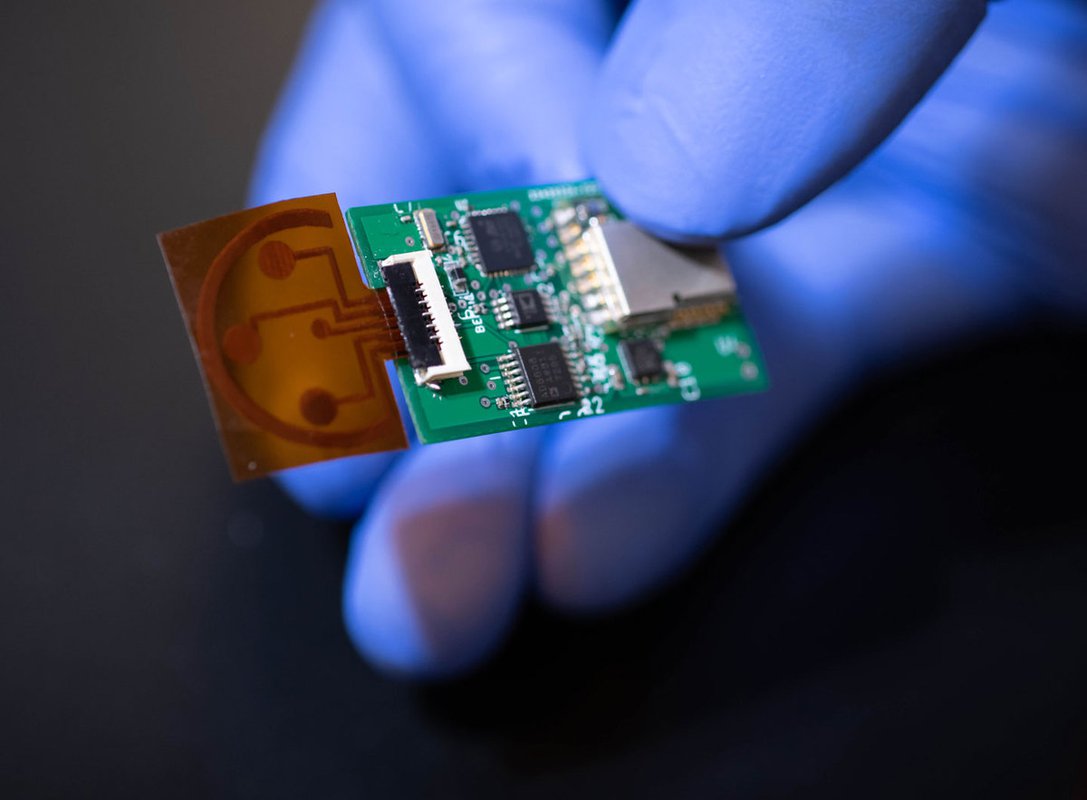