Gerhart plies a trade that hasn't changed fundamentally in centuries. Just like the glassblowers of bygone days, Gerhart must begin with a quantity of glass, heat the glass until it glows red, spin the nascent object slowly to keep it from sagging, blow air by way of a mouth tube to add volume and shape, bend it if necessary, and cool it slowly to avoid cracking it.

Then, if all has gone well, Gerhart is ready to deliver the custom-made glass device to one of his many clients in Caltech's Division of Chemistry and Chemical Engineering or, occasionally, to other experimenters across campus.

"Glassblowing began with the ancient Egyptians," says Gerhart, an easygoing Caltech employee of seven years and a professional glassblower for more than 30. "Just like then, the goal is to keep the material from doing what it wants to do, which means you're always working with gravity.

"The way glassblowing probably got started was when some sand got too close to the fire and somebody noticed that you could gather up a glob and shape it," he says. "That's basically what artistic glassblowers do to this day."

Though the essentials really haven't changed much, scientific glassblowers like Gerhart have established a few shortcuts to make the work more uniform and efficient, and the glassware itself more durable. For one, Gerhart starts with Pyrex or quartz tubing of varying diameters and lengths, rather than a rounded mass of molten glass. This is not necessarily the best way to make an object of art, but it is an excellent means for constructing a receptacle that will likely be subjected to heat and high vacuums.

The way of the scientific glassblower, then, is to soften, shape, and fuse the glass tubing into a finished product. Pyrex is the choice for most routine experimental applications because it can take a lot of heat. But if the receptacle is to be cooled rapidly as well, the more expensive quartz tubing is preferable.

Another reason glassblowers use tubing is that it provides a head start on constructing a receptacle with rounded surfaces. Because chemists often use vacuums, they tend to avoid any sort of container with flat walls because a round receptacle is much better at resisting stress.

One might wonder why Gerhart's skills are necessary to a chemistry department when glass beakers and such can be ordered from a supply company. The answer is straightforward: because a cutting-edge chemistry department aims at doing one-of-a-kind experiments to uncover the subtleties of natural law, the researcher often requires a one-of-a-kind glass device to perform the experiment. Glass is the medium of choice because it reacts with very few chemicals, is relatively pliable and easy to work with, and is fairly cheap. Finally, glass provides a window to observe the ongoing experiment.

Gerhart has designed glassware for many of Caltech's most noteworthy chemists—including the 1999 Nobel laureate Ahmed Zewail. Another of his regular customers is John Bercaw, who is at the forefront in the design of catalysts for real-world applications. A typical glass high-vacuum manifold system for Bercaw can easily cost $20,000 to $30,000 and snake around half a laboratory.

"That's a good example of why my job exists," Gerhart says. "Once a (piece of work) is finished, there's nothing exactly like it in the world.

"For the more routine items you need—like beakers and flasks and test tubes—you can go through the catalogs from the supply houses and order them. I could make them, but there wouldn't be any point."

As for whether the work of the glassblower will always be needed, Bercaw has an interesting perspective. Though he often collaborates on computer simulations of experiments, Bercaw thinks chemists will never get away from regularly pouring a few chemicals.

"Experiments are always going to be required," he says. "So wherever there's experimental chemistry being done, there will always be a need for glassblowing.

"Glassblowing is not work that can be done by a computer—this is a real art," he says. "So you need someone talented and with a sense of aesthetics, and Rick is really good."

Nonetheless, Bercaw and Gerhart both say that chemical research has changed in such a way the last 20 years or so that the workload of a glassblower has inadvertently decreased. The reason is that chemists prefer to use smaller amounts of chemicals these days, which means that smaller glassware and experimental setups are required, which in turn means less human labor is required to produce the glassware.

"It takes a lot of time and manpower to make large and complicated glassware," says Gerhart. "So I think a lot of staffs have shrunk by attrition."

A native of Corning, New York, Gerhart grew up in a place where the glass industry has long been a significant economic force. Though he doesn't particularly consider glassblowing the family business, his father was a scientific glassmaker, and an uncle made glassware for the National Institutes of Health.

Although a child when his father died, Gerhart's early exposure to the glassblowing trade piqued his interest. At 20 he enrolled in a two-year program at Salem County Technical Institute in New Jersey—the only school in the United States for scientific glassblowing and one of the few in the world where one can study the art.

"Today, the best way to get into the business is probably to go to trade school," he says. "Or if you're really lucky, you might get to be an apprentice, but that's less likely these days now that glassblowing departments are getting smaller."

As for job satisfaction, Gerhart says he has no complaints. He enjoys the work and was rewarded by his peers in 1997 when they elected him president of the American Scientific Glassblowers Society.

"It's different—every day the workload changes, and every couple of years you're working with new people because a new set of graduate students and postdocs has come along. "Also, you get to work with the elite in research," he says. "So it's not a routine job—not a mundane job." 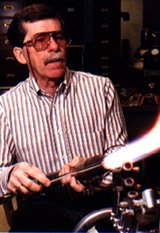