In black widow star systems, a rapidly spinning dead star, called a pulsar, blasts its orbiting companion with radiation, slowly evaporating it. Like their namesake spiders, the pulsars take advantage of their lower-mass companions before destroying them, by harnessing material and energy from the doomed partner stars.

A new study published in the journal Nature reports a new candidate black widow star system, named ZTF J1406+1222, in which the stars orbit around each other every 62 minutes—the shortest orbital period observed to date for this type of binary star system. The previous black widow record holder, PSR J1653-0158, contains stars orbiting around each other every 75 minutes.

The new candidate system was found using the Zwicky Transient Facility (ZTF) instrument at Caltech's Palomar Observatory near San Diego. ZTF is funded by the National Science Foundation (NSF) and an international consortium of partners.

"This 62-minute orbit is remarkable because we don't understand how the stars could get into such a tight orbit," says Kevin Burdge (PhD '21), a postdoctoral scholar at MIT who performed the research while at Caltech. "The process of the pulsar ablating its companion should actually drive them apart. This is pushing the boundaries of what we thought possible."

Burdge says that upcoming observations from NASA's Chandra X-ray Observatory should help confirm the result. "Our data indicate we are looking at a black widow binary, but it could be something entirely new."

The first black widow star was discovered in the 1980s, and, since then, a few dozen have been found along with a similar spidery "species" of stars called redbacks, which also consist of pulsars and doomed partners. Scientists say that the rapidly spinning pulsar stars, in both redback and black widow systems, pick up energy and speed by siphoning material away from their companions.

"The lower-mass stars donate material to their partner stars but suffer the consequences," explains Burdge.

The new candidate black widow binary stars were identified by scanning millions of stars for those that rapidly blink on and off in the night sky. ZTF captures images of the entire night sky every two nights thanks to its camera's large field of view, which covers an area of sky equivalent to a grid of 247 full moons. The sky survey enables researchers to search for objects that change in brightness or location on rapid timescales. "ZTF has revealed a zoo of exotic stellar species," says co-author Tom Prince, the Ira S. Bowen Professor of Physics, Emeritus, at Caltech and a co-investigator of ZTF. "Rather than being boring, static objects, a large fraction of stars exhibit dips, pulsations, or periodic brightenings that are a key to understanding their nature."

In this case, Burdge developed an algorithm to search for ZTF objects that dramatically change in brightness on timescales of less than 80 minutes.

Interestingly, this black widow system also has a third companion orbiting much farther out, at a distance of roughly 600 astronomical units, or AUs (an AU is the distance between Earth and the sun). While the primary pulsar and brown dwarf orbit each other every 62 minutes, the third partner star orbits the tight pair every 10,000 years.

The scientists also point out that this is the first black widow system discovered using optical light. "The population of black widows we've been finding so far with other wavelengths of light, such as X-rays, gamma rays, and radio waves, is probably biased because we haven't been catching all of them," says Burdge. "Now we have a new lens through which we can identify these systems."

Additional ZTF support comes from the Heising-Simons Foundation and from Caltech. ZTF data are processed and archived by IPAC, and astronomy center at Caltech. 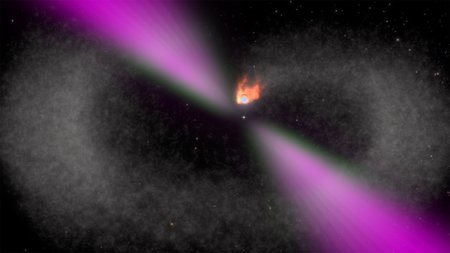 An illustrated view of a black widow pulsar and its stellar companion. The pulsar's gamma-ray emissions (magenta) strongly heat the facing side of the star (orange). The pulsar is gradually evaporating its partner. Credit: NASA's Goddard Space Flight Center/Cruz deWilde
Image Lightbox 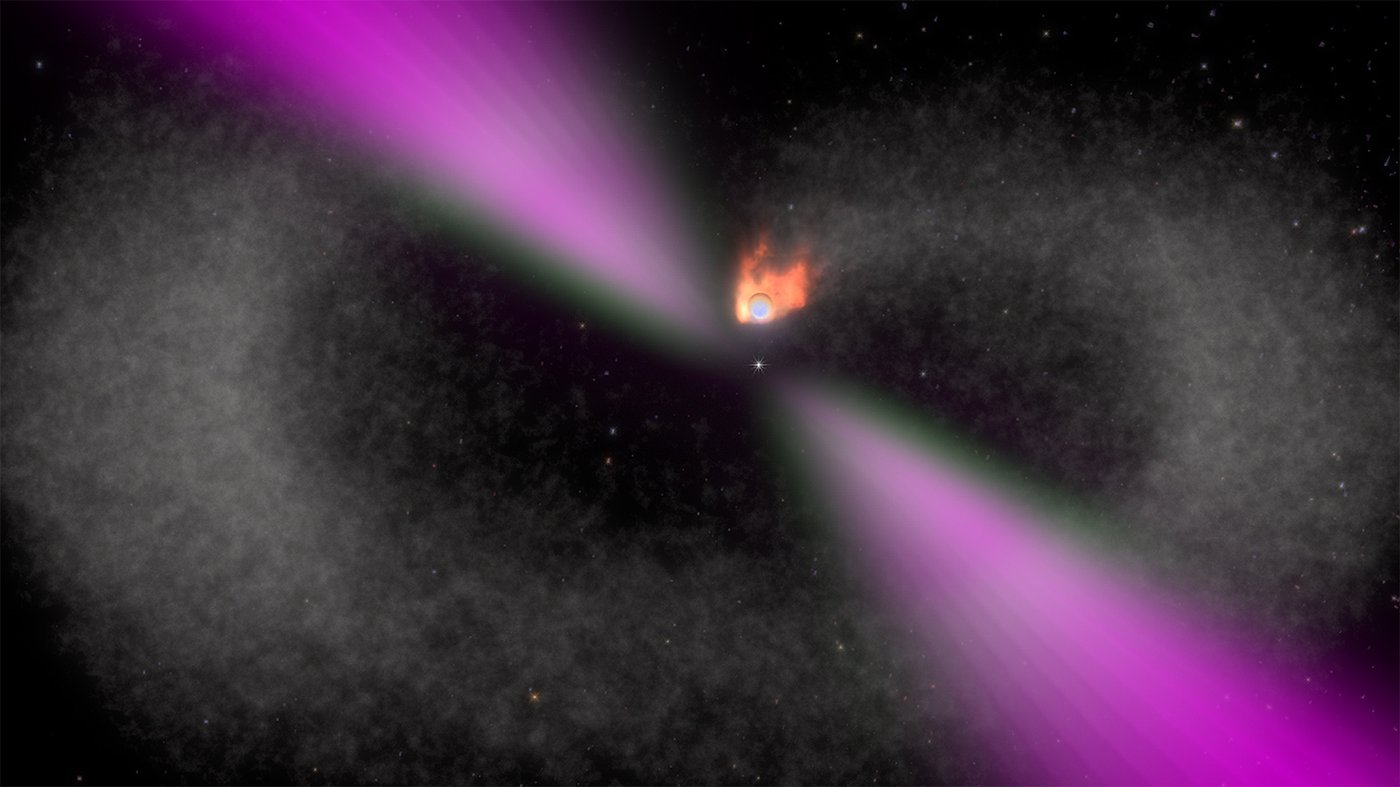